Stand Up and Fight Back


Following an article that appeared on the Daily Mail website on Tuesday, in which a Mr Shahid Akmal said White Women have no morals, Akmal who until recently was the chairman of governor at Nansen Primary School in Birmingham, where he was removed of this post last week because the school has been placed in special measures after it was rated 'unsatisfactory' by ofstead inspectors.
This is what Akmal said at several coaching sessions in London hotels.
He agreed when asked if white children were lazy, before criticising white women, declaring: 'I tell you, our women are much, much better consciously in the heart than any white women. White women have the least amount of morals.' During another conversation, Akmal argued that girls should be taught to sew and cook to prepare them for a role looking after her house and children, while boys should learn skills such as mechanics and construction.
He then attacked leading female politicians, saying: 'She has to sacrifice her family, she has to sacrifice her children, she has to sacrifice her husband, all in the name of equality. And there are so many marriages that have broken up because of this.'
Akmal also argued that homosexuals, adulterers and people who have sex outside of marriage should be exiled, saying the Sultan of Brunei was right to introduce the death penalty for homosexuality and adultery.
And he described British jihadis fighting in Syria and Iraq as freedom fighters, while saying alleged Trojan Horse plotters only wanted the best for Muslim children - and to stop them being suppressed by a lack of education.
He said: 'It's easier to control. If you get an education you get a mind. When you get a mind you ask questions. They don't like that.'
After reading this article my wife Yvonne became very angry and hurt at how he could describe White women in this way and get away with it, Yvonne was not happy and upset and wanted to do something about it, so the first port of call this morning was to visit Nuneaton police station and make a formal complaint of racial hatred and Homophobic hatred, under the race relations act. at first the police typically did not want to take a complaint and just told us to leave a phone number and some one would be in touch, undeterred and unhappy with this Yvonne demanded that some one deals with this crime now, after an hours wait, a police Sgt came who just happened to be Asian, he then tried to tell us that no crime had been commited, we then informed him that under the race relations act there was a big crime commited, he then responded by informing us that because Akmal had said this in London Hotels it was the Metropolitan police force that should deal with it. So we got a number and off home we went and phoned the Met police up, who seemed very helpful and agreed a race crime was commited, they took details and more importantly gave us a crime number and said some one will call us back to discuss how they would investigate it, and sure enough within half an hour they phoned, they also could not believe that Warwickshire police would not act on it, so the investgation is under way.
If anyone else should wish to complain, and this is something that we all should start complaining about here is the phone no, 0207 230 1212.
Here is the link to the full article.
http://www.dailymail.co.uk/news/article-2701063/Schools-Birmingham-deeply-divided-Balkans-Labour-MP-accuses-Government-fuelling-culture-wars-ahead-new-report-Trojan-Horse-allegations.html

UPDATE
Me and Yvonne both attended Nuneaton Police station last night and made statements about our complaint of racial hatred and homophobic crime, they do it to us so its time we turned the tables, now its a waiting game. 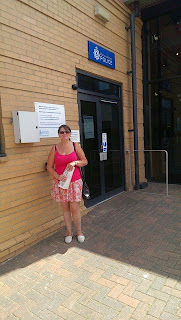 Yvonne outside Nuneaton Police Station
Posted by Alwyn at 09:40 No comments:

Please visit http://savesaltleyschool.wordpress.com for the
latest update on this school.
Posted by Alwyn at 22:34 No comments: 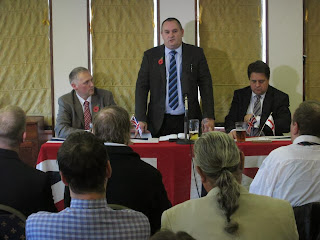 Sunday 27th October saw the West Midlands hold their regional fundraiser for the 2014 euro elections in Coventry. Alwyn Deacon, West Midlands Regional Organiser and National Elections Officer opened the meeting and explained to the audience what was needed to fight a good effective campaign and hopefully return an MEP for the region.

Nick Griffin MEP and party Chairman was next up and gave a insight to the work of a MEP and gave some examples of his time as a MEP.

Alwyn Deacon then announced the candidate list for the West Midlands and it is as follows.

After a short break the meeting resumed with Mike Coleman giving a excellent speech which was well received.

The collection raised £1000.68 towards the election campaign, there are lots of activities being planned over the next couple of months, if anyone wants to get involved in helping the West Midlands or donate to the West Midlands fund please contact Alwyn Deacon on 07709346012 or email westmids@bnp.org.uk
Posted by Alwyn at 15:34 No comments:

Following on from the article on this website on the 1/10/13 psycho-school-knife-thug-allowed-stay
This is a statement from the parents who are desperate to protect their children. 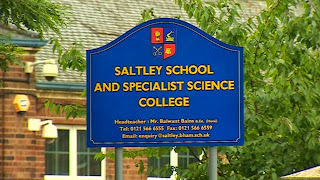 Please find for your attention the following statement:

We the local parents of Saltley School, the centre of the “school knife thug saga”would like to inform the people of the UK our continued struggle for justice, we sent our children to this school on the principality of a safe environment, impartial teaching, to seek a good rounded education, we didn’t subscribe to a faith school and we certainly didn’t elect any of the parent/community governors.

Knife crime, drugs, anti- social behaviour and all other kinds of delinquency are a direct manifestation of weak leadership of the current board of governors, who seem to think a knife brandishing money extortionist child thug has “equal rights” to stay at our school.

We the local parents feel appalled and let down by the local authority, Councillors and politicians all of whom have assumed this particular incident will go away.

The nation needs to know that the corrupt vile mechanics of institutionalised racism will be well oiled, the school board of governors will meet today (17/10/2013) at 3pm (Birmingham City Football Club) to elect a new vice chair; the previous vice chair was “white” and resigned we can also confirm the current board has no white parent/community governors and all are Muslim.

We have lost all confidence in the “system” many parents are pursuing transfer requests due to the school not being fit for purpose the board of governors, and the local authority should all hang their heads in shame for systematically bringing this school into disrepute, for bolstering their own agendas, policies, egos, political compulsions and propagating racist ideologies and steering the school into academy status.

Saltley School board of Governors should all be sacked with immediate effect, local children’s lives can’t be put at risk anymore, we parents have limited resources but we’re fighting on, a fight that will envitably have major consequences on 23rd May 2014 local elections!


Birmingham education dept are trying to sweep this under the carpet, we can not and will not let this happen.
Please feel free to email or telephone the

and let them know we will not tolerate this kind of behaivour.


School life should be all about learning in a safe secure environment, parents bestow their trust with teachers knowing their children are looked after by professional qualified individuals ... that belief has recently been shattered over a knife wielding thug that’s been allowed back into my children’s school, pupils and members of staff were the victims of threatening and abusive behaviour on 22nd May just before the school summer holidays this year.
Saltley School originally permanently excluded the teenager, but the decision was overturned by a group of what I can only describe as delusional and incompetent governors who thought it was in the best interest for this knife wielding beast to come back into school.
The head teacher Balwant Bains confirmed a "very serious" incident had been dealt with "through due process", and police confirmed they took "no further action" after the incident; however recent press coverage has heightened tensions within the school including teachers who have refused to teach the thug and the local community also asking why original descion was overruled; but also opening up a whole can of worms over the sheer lack of governance at the school.
An emergency meeting was arranged last Friday (27/09/2013) by the head teacher for parents with a local authority “representative” , parents were furious at the original decision being overturned the majority of the parents being “Asian” and asking for this particular knife thug to be kicked out of school completely!
The meeting also discovered the shocking stories of daily racist verbal and physical abuse that white (English) mothers have to put up with, gasps of shock and disgust echoed around the school hall, daily stories of abhorrent language shouted at young English families, stories of English families having to pre plan journey routes to and from school in the vain attempt to avoid Asian school thugs pelting them with stones or being spat on!
I spoke to one of the local victims who told me she felt helpless afraid and worried sick for the safety of her children “I can’t afford to move out” if it was “Muslims” that had to go through this they would be up in arms and shouting “Jihad” where can I go who’s going to help me she whimpered! The knife saga at Saltley School is literally the tip of the ice berg, the sheer lack of governance beggars’ belief how an institution can carry on operating with such low esteem negative publicity and inherent racism, institutionalised or otherwise?
It seems that the local authority have also dragged their feet haven’t acted sooner or intervened in what can only be described as a disaster waiting to happen, the local councillors (most with chequered pasts including vote rigging, fraud, bent mortgages etc) have shied away apart from one who gave a cameo appearance on his local news channel last week; interestingly enough the current chair governor was also sacked from a previous governorship position due to that particular school slipping away into special measures syndrome!
The real question needs to be asked how local authority school governors are policed and regulated, if at all; surely parents have a democratic say in how their school should be run and be operational. I now have to step up and be counted, I’m not racist but I do know when a bad judgement call has been made, true justice and accountability needs to prevail, integrity needs to be upheld and that’s why I think it’s so important that the “British National Party” hears my plea!